by Juan Paxety on September 22, 2008
in Feature, Politics 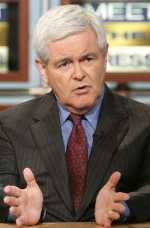 Early in his administration, I said that George W. Bush reminded me of President Nixon more than anyone else.  Not the paranoid Nixon of Watergate, but the big government Republican Nixon. Now we see President Bush and the national government making a grab for a huge amount of power – the bailout of the financial industry.

i personally resent it.  No one bails out ordinary people when they make bad decisions.  They could once seek bankruptcy protection, but that was largely eliminated just a couple of years ago.  Who benefitted?  The same financial industry that’s seeking a bailout now.

The Amen chorus in the talk radio industry is at this point leaning towards accepting the huge power grab.

Newt Gingrich is not one of my favorite politicians, but he his right a lot of times.  He’s right when he writes on The Corner

Imagine that the political balance of power in Washington were different.

If this were a Democratic administration the Republicans in the House and Senate would be demanding answers and would be organizing for a “no” vote.

If a Democratic administration were proposing this plan, Republicans would realize that having Connecticut Democratic senator Chris Dodd (the largest recipient of political funds from Fannie Mae and Freddie Mac) as chairman of the Banking Committee guarantees that the Obama-Reid-Pelosi-Paulson plan that will emerge will be much worse as legislation than it started out as the Paulson proposal.

If this were a Democratic proposal, Republicans would remember that the Democrats wrote a grotesque housing bailout bill this summer that paid off their left-wing allies with taxpayer money, which despite its price tag of $300 billion has apparently failed as of last week, and could expect even more damage in this bill.

But because this gigantic power shift to Washington and this avalanche of taxpayer money is being proposed by a Republican administration, the normal conservative voices have been silent or confused.

Newt goes on to ask four questions Congress should be asking, and he goes on to give his answers.  You should really read them.

I’m calling this the give up Congress.  Harry Reid has said he has no idea what to do. Nancy Pelosi has already made her millions.  They both seem to be the kind of people who seek power for power’s sake, then have no idea what to do with it when they get it.  They remind me more of city aldermen than national political leaders.

We are indeed at a crisis, but the crisis is in the multiple failures of government.