It’s hard for me to accept, but it was 40-years ago today that Mahone and I joined eight other guys at Project 70 Studios in Athens, Georgia, to record a demo tape of our new band. We had grafted two groups, The Dukes of York and The Bluenotes, into The Fabulous Bluenotes – here’s photo of the band without the singers – Mahone on the extreme left (ha- leftist) , Juan kneeling on the extreme right, wearing sunglasses in a pathetic attempt to fight off allergies to smoke and beer and the other pollutants common to juke joints. 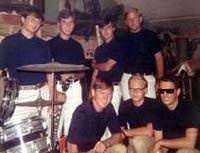 Joining us was the singing trio, The Three Heads. We recorded four songs, and as long as the bandwidth holds up, I’ll leave the links up for you to enjoy. We were kind of a Stax/Volt meets Motown group that showed a lot of soul influence. Following the lead of Sir George Martin, I’ve left the recordings in their original mono.

Baby, I Love You

I, quite frankly, never expected us to live this long – especially Mahone.