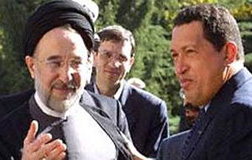 We’ve written in the past about Iran’s force projection into Latin America. In Venezuela, there’s a tractor plant and cement plant as well as an oil refinery. hugo chavez is also expressing interest in Iran’s nuclear program. We’ve reported on how Iran may be buying uranium from Venezuela.

In Argentina, Iranian-supported Hizbollah set off bombs that killed people at Jewish centers in the 199s. And that the blasts were intended to intimidate Argentina for failing to help Iran build nukes.

In Cuba, the mullahs have promised to build yet another cement plant and an electric power plant. The Cubans and Iranians also signed an agreement in which the Iranians promised to send engineering and technical services to Cuba.

Now another communist dictator-wannabe in Latin America is cozying up to the mullahs. Daniel Ortega is allowing the Iranians to build a shipping center in an extremely remote part of his country. One of this country’s most innovative reporters, Todd Bensman, made a trip to Monkey Point, Nicaragua, and files a special report with the New York Sun.

If the ruling mullahs of the Islamic Republic of Iran were chafing enough about U.S. Navy vessels in the Strait of Hormuz to send speedboats after them last month, they must take some comfort in having projected an equivalent threat in America‘s own backyard, in this unlikeliest of locales.

The Iranians have planted their flag here in the tree-festooned wilderness of hills that jut out to shelter a vast, unspoiled Caribbean bay on Nicaragua’s eastern shore. The point’s namesake monkeys swing through the heavy canopy above the smattering of Rama Indians and black Creole people who hunt them and other wildlife for daily sustenance, just as they have for generations. No television or communication informs the Rama and Creole of the internecine goings on in distant Managua, let alone some American beef with Iran half a globe away.

While Iranian money has yet to materialize, the embassy that national security experts most fear as cover for terrorist plots is up and running. Revolutionary Guard operatives reportedly have been moving in and out of the country. In one instance, a senior government minister allowed 21 Iranian men to enter secretly without passport processing.

The longevity of any Iranian presence in Nicaragua may depend on whether it helps Mr. Ortega maintain his razor-thin margin of public support. Influential domestic opponents of the administration are ramping up strong criticism of the alliance, while Nicaragua’s poor will support it unless promises go unfulfilled.

And this, from Bensman’s earlier report in his home newspaper, The San Antonio Express-News.

The second military helicopter in as many days hovered over the jungle and then landed to a most unwelcome reception from several dozen angry Rama Indian and Creole villagers. Rupert Allen Clear Duncan, a leader of some 400 Creole who live along the shoreline, confronted the foreigners dressed in suits and military uniforms that day in March and demanded to know the purpose of their aerial trespasses.

“This is our land; we have always lived here, and you don’t have our permission to be here,” Duncan spat, when refused the courtesy of an explanation.

Not until Duncan threatened to have his machete-waving followers damage the aircraft did they learn that some of the men were from the Islamic Republic of Iran and had come promising to establish a Central American foothold in the middle of their territory.

As part of a new partnership with Nicaragua’s Sandinista President Daniel Ortega, Iran and its Venezuelan allies plan to help finance a $350 million deep-water port at Monkey Point on the wild Caribbean shore, and then plow a connecting “dry canal” corridor of pipelines, rails and highways across the country to the populous Pacific Ocean. Iran recently established an embassy in Nicaragua’s capital.

In feeling threatened by Iran’s ambitions, the people of Monkey Point have powerful company. The Iranians’ arrival in Nicaragua comes as the Bush administration and some European allies hold the threat of war over Iran to force an end to its uranium enrichment program and alleged help to anti-U.S. insurgents in Iraq.

The News-Express even publishes a graphic illustrating Iran’s advances in the Americas. 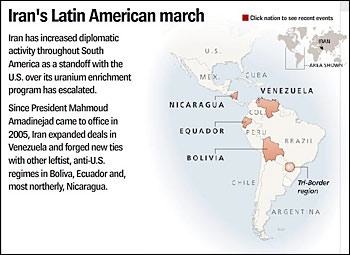 Why do we care? For one, the National Security Ageny is backing away from it’s earlier, unbelievable story that Iran was no longer pursuing nukes.

At a hearing yesterday (February 5, 2008) of the Senate Select Committee on Intelligence, the intelligence director, Michael McConnell, said, “If I had ’til now to think about it, I probably would change a few things.” He later added, “I would change the way we describe the Iranian nuclear program. I would have included that there are the component parts, that the portion of it, maybe the least significant, had halted.”

And now we get word that Iran has in fact developed a new centrifuge.

Iran‘s nuclear project has developed its own version of an advanced centrifuge to churn out enriched uranium much faster than its previous machines, diplomats and experts said Thursday.

More significant, the officials said, is the fact that Iran appears to have used know-how and equipment bought on the nuclear black market in combination with domestic ingenuity to overcome daunting technical difficulties and create highly advanced centrifuges.

And a Swiss site reports Iran has begun building another nuclear plant.

Last week, the Iranians tested a new rocket – one powerful enough to reach space. Experts say this was probably the Iranian Sahab 4 rocket – based on Soviet technology. In fact, it may well be the Soviet SS-4, the very missiles the Soviets put in Cuba leading to the Cuban missile crisis. They have a range of 2000-km. Or, it could be a new missile from North Korea that is also based on Russian technology with a range of 4000-km.

What does that mean for the U.S? Again from Bensman:

What worries state department officials, former national security officials and counterterrorism researchers is that, if attacked, Iran could stage strikes on American or allied interests from Nicaragua, deploying the Iranian terrorist group Hezbollah and Revolutionary Guard operatives already in Latin America. Bellicose threats by Iran’s clerical leadership to hit American interests worldwide if attacked, by design or not, heighten the anxiety.

“The bottom line is if there is a confrontation with Iran, and Iran gets bombed, I have absolutely no doubt that Iran is going to lash out globally,” said John R. Schindler, a veteran former counterintelligence officer and analyst for the National Security Agency.

Lashing out globally could mean attacks on the U.S. mainland. If the Iranians built a missile base (using the tractor plant and cement plants) in Caracas, Venezuela, that’s 3500-km from New York City – well within range of the second missile. If they built a base in Managua, Nicaragua it would be less than 3400-km from New York. Even the 2000-km missile puts parts of the U.S. within range. Miami, for instance, is 1642-km from Managua, New Orleans is right at 2000-km, and Houston and the port of Galveston are slightly farther than 2000-km.

This all has very serious potential. I hope someone is Washington is paying attention.