The unprovoked attack on IRS employers and property last Thursday by enraged software designer Joseph Stack is just the latest of many such violent incidents directed at this benign and often misunderstood federal agency. According to Justice Department statistics, there are an average of 918 threats against the agency every year.

Mr. Stack, a bass-playing software engineer who had been engaged in a dispute with the agency for some time, set his house on fire before flying his plane into a building that housed a division of the IRS in Austin, Texas.

Such actions as Mr. Stack’s have led some to speculate that the IRS’s heavy-handed confiscatory and enforcement policy may be driving people nuts. inflatable games for sale FBI profilers worth their salt can tell you just how dangerous nerdish, bass-playing software engineers like Stack have always been – as are members of the Tea Party, anyone who listens to Rush Limbaugh, anyone who speaks out against President Obama, or watches FOX news, is a veteran or who has ever complained about paying taxes! These are the ones you have to watch out for: Hard working people who pay taxes.

Mr. Stack left an online missive that rambled more than an Al Gore speech, leaving many confused about just who he hated most. But the crashed plane and the smoking IRS building seem to be definitive. Many hate living under an oppressive tax system; in fact, our country was founded in a violent response to an oppressive tax system. Though many have assumed that the IRS’s policies – such as attaching bank accounts, seizing assets, charging for the accumulation of interest, inflicting massive fines and penalties, and putting citizens in prison for debt – are the precipitating event in Stack’s Kennedyesque terminal air flight, liberal pundits assure us that this is simply wrong-headed, or, as the media says, conservative thinking.

According to an article in the Christian Science Monitor online, “The increased level of attacks likely come as a result of the depressed economy.” Right! Anyone who watches the History Channel is familiar with all the IRS office bombings and attacks on its employees that took place during the depression. It has nothing to do with the brutal and unfair collection of money, by force, from a small percentage of the working population (approximately 50% of Americans pay taxes, the other half doesn’t) that is tired of being forced at the point of a gun to support a non-working class of Democrat-voting Americans and to support illegal aliens by paying for the medical care and education of their children. The only stigma to being a tax cheat in America is getting caught, and even that doesn’t apply to the rich and powerful. Treasury Secretary, Tim Geithner, who oversees the IRS, is himself a tax cheat who escaped any significant penalty.

But it’s the economy, plain and simple. If the economy were better, tax-paying citizens would be deliriously happy to up and fork over their ton of flesh to the IRS without so much as a whimper, and would not react to the news that they’re the subject of an IRS investigation as if they had just found out their proctologist intended to give them a rectal exam using an unlubricated Louisville Slugger baseball bat.

The airplane attack and the attendant bad press came on the heels of the announcement earlier this month that the IRS was beefing up its firepower by the addition of sixty Remington 870 tactical 12 gauge pump shotguns to its arsenal. The tricked-out Remingtons have fourteen inch barrels, modified chokes, Ghost Ring rear sights and adjustable shock-absorbing stocks (you wouldn’t want an IRS agent to get a bruised shoulder when he blows your head off, would you?).  (Ed note – it is illegal under federal law for a private citizen to own a shotgun with a barrel length of less than 18-inches.)

When Treasury Secretary Geithner was asked about the necessity of such brutal weapons, he replied, “It is of no consequence that the Remington 870 tactical can blow a hole the size of a watermelon in a citizen. Only Tea Party fanatics and radicals who distrust all-powerful monolithic government and don’t like the IRS would focus on something as trivial as that. As usual, you guys in the right-wing press completely misunderstand our motives and try to put your own spin on things. We’re nice guys at the IRS, and the tax collection process is completely voluntary. However, if citizens decide not to volunteer to pay the amount we decide they should volunteer to pay, and, in the line of duty we have to shoot them, we certainly don’t want them to linger in pain and agony; hence, the Remington tactical shotguns. Besides, I hear that both Sarah Palin and Dick Cheney own Remington shotguns. So there.”

In the wake of the bad publicity over the airplane “incident” and the shotgun purchase, this week White House Press Secretary Robert Gibbs announced a move to “soften” the tarnished image of the IRS. “Instead of having the agency’s enforcement workers represented by non-defining business attire, we will now dress them in uniforms, to give them a sense of cohesion.” 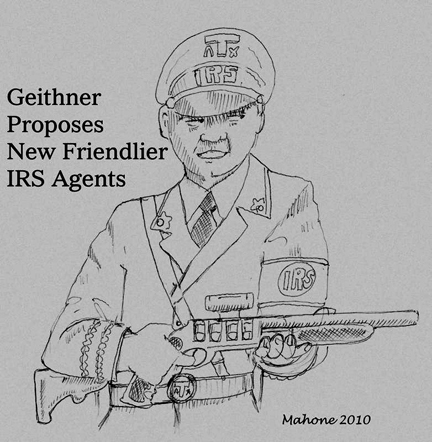 White House Chief of Staff Rahm Emanuel is said to have personally contributed to the design of the new IRS uniforms. When asked by this reporter in a phone conversation why he thought IRS employees needed to wear uniforms, he responded, “One word: Image. Hell, even a retard . . . is this on tape . . . I mean, even a person with significant developmental challenges knows that everyone from bus drivers to garbage men wear uniforms. Why not the IRS? The President and I agreed that they needed something special, professional yet slick, that tells you with one look just who they are and what they stand for . . . something with sleeve braids, flashy wide lapels, a big snappy airline captain’s style hat, a wide polished leather belt, and arm bands that clearly identify the wearer as proud a member of the IRS. I think our design succeeds admirably in defining exactly what our agents represent.” (See illustration).

Some, however, have noted that the new IRS uniform has a marked resemblance to a Nazi SS uniform. (For one example, the big silver T (which stands for taxes) in the middle of the hat looks like an eagle with outstretched wings). When Paxety Pages reporter Mahone Dunbar finally reached Treasury Secretary Geithner by phone and asked him if he agreed that the new IRS uniforms bore a suspicious resemblance to those of the Nazi SS, he quickly replied, “Nein! . . . I mean, No comment. Heil, Obama!”