Romulus and Uncle Remus: A True History of Rome 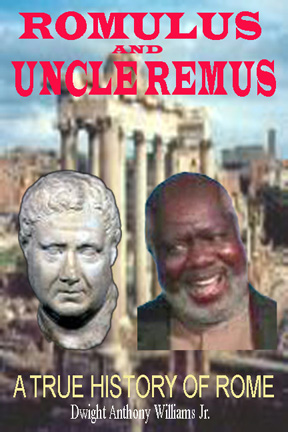 Just in time for Father’s Day is this interesting historical offering, Romulus and Uncle Remus, A True History of Rome, by author Dwight Anthony Williams Jr.

Recent decades have seen historical revisionists lay claim to indigenous Sub-Saharan Africa as the source of Egyptian civilization, Greek Civilization, the Jewish civilization, Christianity, and the various cultures of MesoAmerica! In fact, the only historical domain left to the Caucasian race was Rome – which, with it’s engineering feats, architectural wonders, and militaristic proclivities – was the paradigm for modern Western society . And this historical assumption — that Rome was the result of Caucasian influences — is a blotch on the historical record that author Dwight Williams seeks to erase.

The style of research and scholarship presented in Romulus and Uncle Remus will seem familiar to readers of the late Asa Hilliard, who almost single-handedly pioneered the black revisionist view of ancient history. And this is no accident; until his HOPE scholarship was revoked (still a matter of some contention with the author) Dwight Anthony Williams, Jr. attended Georgia State University, where Dr. Hilliard taught! (During his brief tenure at the university, Mr. Williams was a prodigious student activist who frequently came to grips with the administration over their refusal to paint the university’s hallways in a color scheme that reflected the Pan-African flag. This, not poor academic performance, he maintains, is the reason his scholarship was withdrawn.)

Not one to be constrained by the shackles of standard academic scholarship that the Eurocentric establishment has tried to impose upon the world, Mr. Williams feels his way through a panoply of historical data emotionally. And to surprising effect. Though Mr. Williams is admittedly self taught in the interpretation of paleologaphical data, and seems to have little regard for, or knowledge of, the standardized methods associated with historical research, he nonetheless presents a great volume of evidence for his theory by using what he calls the “blackness factor.” Euphonous Roman names loom large as evidence of African presence in Rome. Names like Tiberius and Claudius carry the flavor of Africa, a resonance that one can still hear on basketball courts or in the streets of Detroit or Atlanta..

Mr. Williams makes his most forceful case with Emperor Claudius Nero. Nero’s downfall, according to Mr. Williams exposition, was due to his “beefing” with the white power structure in Rome. “It’s easy to see the true meaning there,” Williams writes: “The name is actually Claudius Negro.” Eurocentric historians, he suggests, conveniently dropped the G from the name Negro in their never ending efforts to obscure African contributions to world history. Historians have always overlooked the germane point here. Claudius Negro, like President Obama, was an agent of change. Nero was a soulful musician who was framed, and then castigated, for burning the city down. “History ain’t changed much,” Williams says. “Always blame the black man. A black man better beware if he rises too high.” According to Williams, Nero, or Negro, because of his wrongful vilification, was the OJ of his day.

Williams takes great pains to point out the psychological and sociological affinities the Romans still have with Black America. As he surmised at a book publishing seminar in San Francisco earlier this year: “The Romans could fight! And every one of ‘em carried a knife. They didn’t like the skinheads of their day, the Germanic tribes, and took every chance they got to whip their tails. Who do that sound like?” (Passionate about his beliefs, as well as verbose on the subject, Mr. Williams offered to fight one book critic who dared to question his research methods.)

Though it does not rank with the works of Gibbon, or for that matter Hilliard, Romulus And Uncle Remus as a whole is meritorious, though the writing is a bit ponderous at times.  And Mr. Williams certaintly ventures on to shaky theoretical ground when he suggest that winged black Egyptians were the vehicles of cultural transference between Rome and Egypt, and that the wolf that suckled Romulus and Uncle Remus was actually a pit bull; nor is his quote by one early visitor to Rome that its inhabitants had dark hair and dark eyes, particularly persuasive evidence of an African population in ancient Rome; however, on the whole, the sum of his evidence is impressive and bears an impartial judgment by future historians.

Romulus And Uncle Remus, A True History of Rome

Previous post: Obamacare push to begin on anniversary of D-Day