Science Proves: Democrats on the dark side of the Bell curve

by Mahone Dunbar on February 18, 2009
in Humor, Mahone Speaks

(Experiments prove that baboons and pigeons are 23% Smarter Than the Average Democrat.) 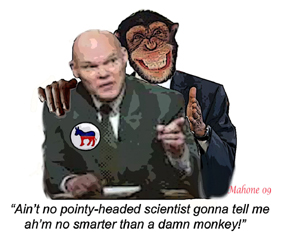 ScienceDaily (Feb. 18, 2009) — In the past it has been safe to say that humans are smarter than animals; however, research by a University of Iowa scientist has cast doubt on the extent of that disparity in intelligence.

According to UI psychologist, Edward Gibbons, who presented his findings at the American Association for the Advance of Science (AAAS) meeting February 18 in Chicago, a vital cognitive capacity for human intelligence is the ability to distinguish whether two or more items are the same or different – a skill which the famous American psychologist William James referred to as the very “backbone” of our thinking.

Gibbons’ research shows that baboons and pigeons can also do that. A study by Gibbons and UI graduate student Al Pike found that both pigeons and people can learn same-different discrimination with visual stimuli that never repeat from trial to trial, therefore proving that simple memorization cannot explain this cognitive feat.

Once it was determined that baboons and pigeons had the ability to discern and make judgements based on collections of same-different, Gibbons and Pike then tested them against various human control groups (variables included selection for age, race, ethnicity, educational level, political affiliation and so forth).

While most human control groups tested average or better than the pigeons and Baboons, there were some surprising exceptions: a random sample of 250 Democrat voters had test scores that were 23% lower than the animal control group! Suspecting a glitch in the testing procedure, the method of selection of test candidates, or perhaps a false negative in the outcome, Gibbons and Pike then selected several control groups of Democrats from around the country and retested. This further testing only re-confirmed the first round of test results. As Gibbons told the AAAS conference attendees, “Apparently the ability to distinguish simple variables is beyond the comprehension of the average Democrat voter. Whether the failure is a result of public education’s short coming in teaching basic logic, or a result of lack of innate reasoning ability, is a legitimate area of debate. However, in the second round of tests, two other control groups, one of registered Republicans and the other of independent voters – with similar educational background – cast some doubt on the former theory.”

Comparisons of like vs. unlike that seemed to cause the most confusion to the Democrat group included a copy of the United States Constitution vs. a copy of Das Kapital, an AK47 with a banana clip vs. a child’s toy cap pistol, and a picture of President Obama vs. a picture of Jesus. There were also fluctuations in the testing that suggested that some cognitive impairment may be highly localized. For example, male respondents in the San Francisco test group had a surprisingly hard time distinguishing an anus from a vagina –  a distinction that comes easily enough to baboons.

These test results, as well as the fact that most members of the animal kingdom show a remarkable degree of independence and self-sufficiency, have fettered attempts by some Democrat political action groups which have been lobbying for the right of animals to vote and possess civil rights since, it was assumed, they would become Democrat voters.

At a press conference related to the revelation of Professor Gibbon’s findings, James Carville, well known Democrat activist and former spokesman for the Clinton administration, said, “Ain’t no pointy-headed scientist gonna tell me ah’m no smarter than a damned monkey!”

When Paxety Pages correspondent Mahone Dubar asked Carville if these findings would put a halt to efforts of Democrat animal rights activists to expand the party’s base by assigning full civil rights and voting privileges to members of the animal kingdom, Carville gave vent to a protracted howl, begin snapping and biting at onlookers, and then loped off before his handlers could catch him.