Visions Of The Coming Obamalypse

by Mahone Dunbar on October 29, 2008
in Feature, Mahone Speaks 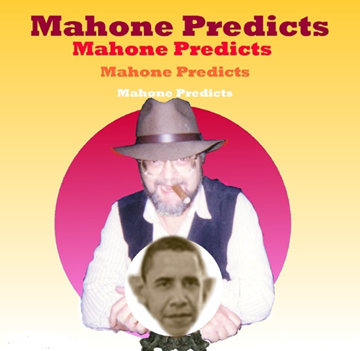 Recently I had the opportunity of spending an hour or so of quality time with a professional sadist. “You won’t feel a thing,” he snickered, picking up one heavy gauge hypodermic needle, which he regarded disdainfully before replacing it on the tray and picking up a bigger, longer needle.

I had originally procured Dentist X’s services because jumping castle I had a tooth that needed capping. It was my second visit to him. The first time, his eyes had lit up when he looked at my dental X-ray. “You’ve got a wisdom tooth here,” he said.

I replied that it didn’t hurt and had never given me any trouble, so since it had never bothered me, why bother it?

“Wisdom teeth are a genetic throwback, and completely useless,” he explained. “They always go bad.”

” So why do we have wisdom teeth? I asked.

“In case the economy falters, I’ve got to get my Mercedes payments and country club dues from somewhere.”

I appreciated his honesty. He went on to explain that wisdom teeth are a proven fount of economic opportunity; most everybody has them, though no one is sure exactly why, and nobody needs them. So anytime a dentist feels an economic pinch, he can simply say, as he had to me, “Before I can do this or that procedure, your wisdom tooth has to come out!” Even though the wisdom tooth in question was on the bottom right hand side of my mouth and the tooth that needed to be capped was an upper on the left hand side, I didn’t question his expertise. He was the expert on extractions. Besides, this was the second time he’d asked. And he seemed determined to get it.

After administering a series of painful Novocain injections with the biggest, longest needle he could find – shots intended, ironically, to reduce pain – he then asked me if I wanted to inhale some nitrous oxide. “No thanks,” I told him. As a firm believer in self medication I’d taken precautions against a bad dental experience by dropping some peyote just prior to coming into his office.

Thus, last Monday, enraptured by the peyote and therefore able to ignore the mini geysers of blood that the drill hurled up from my mouth, and the fact that his assistant had turned into a three-breasted demon dressed in a white wedding gown, and lulled into a state of pacification by the sharp and hungry scream of the drill, my mind was able to drift away from the dental torture chamber and the dentist and his assistant – who were now laughing and talking in an unknown tongue – and once again float leisurely down the many-doored corridor of time. Here, after going only a short way, I opened a door marked 2009 . . . . and visited Obama world.