Ayers deserves the death penalty – for his writing

by Juan Paxety on September 9, 2008
in Feature, Politics 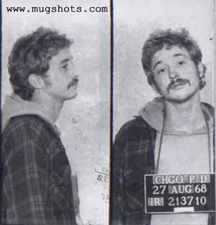 Bill Ayers, as has been well documented, is a friend of Barack Obama’s.  He and his wife Bernadine Dohrn were terrorists back in the late 60s and early 70s – they liked to blow things up.  And talk and talk and talk.

On September 11, 2001, while the rest of the world was watching the murder of innocents at the World Trade Center, Ayers was out promoting his book, “Fugitive Days.”

I obtained a copy of the book in a way that does not enrich Mr. Ayers.  As a favor to you, I am trying to read the damned thing, and I believe it is the most poorly written book I’ve ever seen.

Here’s a random sample – all of the punctuation and capitalization is in the original.

I was the third baby, Cathy leading the way, followed by Tim a couple of years later, and then — boom! –eighteen months and there I was, scrambling, I imagine now, for space and food in the hatchery, angling for rank in this rapidly expanding household. It didn’t take long for me to move up in the kiddyarchy — Rick came along directly, with Juan still a decade off, a kind of blessed mistake or wondrous afterthought.

Juan was not his given name, of course — no, that would be John Steven.  He acquired Juan in late adolescence when, as a school dropout, he went to work as a dishwasher and busboy in a cafeteria in California.  John Ayers, he saw right away, was not a good fit here, and so he reinvented and rechristened himself.  He’s been Juan Chicago to friends and family ever since.

For that kind of writing, I believe Ayers should be shot.  Can I issue a fatwah?

Next post: Just words – lipstick on a pig – UPDATE with video

Previous post: The Truth about Sarah Palin’s Child: An Exclusive