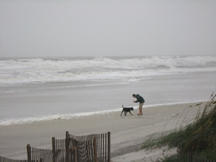 A man and his dog unphased by Fay

Tropical Storm Fay is still off the coast and not moving much, but the wind is picking up at Jacksonville Beach.  It’s still not strong enough to deter all beach goers, though.

There are reports of rogue alligators terrorizing Melbourne, where the streets are flooded by all the rain.

Here on the First Coast, the most terrifying thing is the politicians frantically telling us not to panic as they interrupt television at least once an hour.