fidel retires – so what? 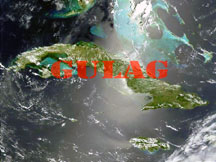 fidel castro has retired as the so-called president of Cuba. Ziva at Babalu has a translation of his statement published in the middle of the night.

I long thought that the end of castro’s reign would mean something. Now, it appears it doesn’t. The regime continues, the Cuban people remain in chains, and tyranny continues. raul is in charge.

What will come? This could simply mean that the communists have spent the year consolidating their power bases and now feel secure enough to allow the emotional leader to move along. It could mean that fidel is dead. Without the caballero leading the country, will the revolution survive? We could be in for interesting times, or just more of the Caribbean Gulag.

Update – The always insightful Charlie Bravo has some interesting ideas that this announcement may portend bigger things.

We’re going to hear hopes that this is the beginning of change in Cuba. We’re going to hear arguments for the lifting of the embargo. We’re going to hear wishy washy eulogies and praise for the bearded bastard. We’re gonna hear a lot of crap today and in the next few days. Cuba experts will be coming out of the woodwork with their own particular theories and there will most certainly be editorials galore. …

This changes absolutely nada. For all intents and purposes, for the past year or two, fidel castro has been but a blurb in the book of Cuba’s political leadership. The man who held the world in terror in the sixties reduced to writing editorials for a mouthpiece “newspaper.”