News From The Future

by Mahone Dunbar on September 26, 2007
in Uncategorized

Where being right is funny, and it’s fun to be right. 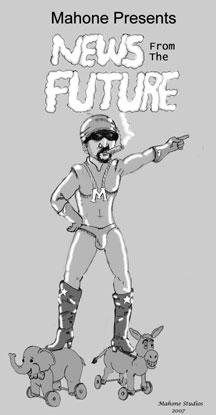 I recently checked my calendar and found out that I’m scheduled for a tune-up rehab visit the first week of June 2009. Since Brittany Spears, Lindsay Lohan and Paris Hilton are also going to be there for their periodic dry-outs, it’s one I don’t want to miss (It’ll be party time in the rec room! They like to take the pills they’ve hoarded all at once and then see who can out-skank the other.)  Anyway, given my metaphysical education in such things as soothsaying, rationalizing orgies as merely Tantric rituals that are vital for saving Gaea (you learn to think fast when you study metaphysics and your wife returns home unexpectedly), and Kabbalah – though, unlike Madonna and Rosie O’Donnell, who both studied under Rabbi Krabitch, I’m self taught — discerning future news is, as youthful waitpersons are given to say these days, “no problem, dude.”So, without further a doo doo, here is the news from the first week of June 2009.

Washington, D.C. – Shock . . .
Many in the nation today are mourning the tragic and unexpected death of President Hillary Clinton. Over the weekend Hillary, as we’ve come to know and love her, slipped on a bar of soap in the shower and suffered a fatal head injury. Her beloved husband, former president Bill Clinton, was alone with her at the time of the accident. “Gosh, darn,” the bereaved former president said to reporters, “I, uh, tried to help her up, then she slipped again. That’s why there’s a couple of bruises on her skull. Say, Congress oughta do something about soap,” he added.

An investigator for the National Parks Service said he was completely satisfied with Mr. Clinton’s answers and that the case was closed.

Washington, D.C. – And Awe
In an unrelated story, early this morning lawyers acting on behalf of former president Clinton filed an action in the federal courts asserting the right of Spousal Succession to the president’s office. According to court papers, Mr. Clinton’s former national security advisor, Sandy Berger – whose security status had fortunately recently been restored — uncovered documents in the National Archives, written by no less than founding father Thomas Jefferson, asserting that Spousal Succession was vital to the constitution. However, according to Berger, these papers were deliberately misplaced by Jefferson’s brooding African-American house maid who was mad at her ‘baby’s-daddy’, until his fortunate discovery of them.

Former CBS newsman and intellect of note, Dan Rather, a friend of both Clinton and Berger, said, “I’ve personally seen the documents in question, and the Remington typeface leaves no room for doubt as to their authenticity. I’d stake my reputation as an objective reporter on it.”

Former president Clinton’s Attorney General, Janet Reno, who was contacted in Florida where she was filming a ‘So Safe” razor blade commercial with actor Michael J. Fox, also gave her considered legal opinion on the matter, saying, quote, “Tha tha tha tha that sss sss ssss ssss sounds ah ah ah ah about ri ri ri ri right tah tah tah tah me.” Shortly afterwards, Ms. Reno accidentally cut herself and Michael J. Fox with a ‘So Safe’ razor and both had to be taken to a local hospital for treatment. Unfortunately, in spite of the excellent emergency care provided Ms. Reno by a team of doctors of Cuban descent, her cut pinky finger proved to be fatal.

Russia – Gay Policy In The Military Clarified
In other news, the Russian Army, in reaction to the American army’s official “Don’t ask, don’t tell,” policy on gays in the military, instituted an official “Don’t do ass, and Don’t do tail” policy. (Speaking on behalf of the Kremlin, Comrade General Poffkoshski noted that, as with the policy of the British, the Navy, especially all those sailors who wear those cute bell bottoms, would be excepted.)

France – Gay Policy In The Military Modified
In direct contrast, the French Army has just finished year one of it’s experimental and controversial “Do ass and do tail,” policy. Over a lavish breakfast of croissants, green cheese, and three types of heavy sauce, General Leray’ de Sosou, public liaison for the French military, exclaimed in heavily accented English, “Sacre le blue! Nout onlee has dhesse polo-see resulted in moor contented sold-jahs, but you should zee zee parade grounds! You could eat oft them. And you would not believe how polished zee canon barrels are! And zee new soldiers we are getting . . . they just love zee military discipline now.”

North Korea – The International Environmental Movement Suffers A Setback
By boat, by plane, on bicycle and on foot, tens of thousands of dedicated, idealistic and unemployed Greenpeace protestors descended on North Korea this weekend to object to that country’s expansion of its nuclear program and the impact on the environment its careless disposal of nuclear waste was having. The delegation of Greener protesters was so numerous that it was said to have virtually depleted the West’s brain trust of youthful persons vital to . . . well, protesting various things.

Many were surprised Friday when North Korea’s leader, the honorable Kim Jong-il, ordered the nation’s boarders open to the Greeners. However, come Saturday afternoon — due to an absence of hollering, whining, sign-waving, cavorting, un-syncopated drumming, chanting and sloganeering on the streets of Pyongyang, the capital of North Korea – a few concerned persons in the media became curious about the Greeners’ absence.

“Pyongyang is a dangerous and desperate city,” a CNN reporter said at a hastily organized press conference. “In fact, due to your squandering of the country’s resources on nuclear research, many of its citizens are starving in the streets.”

A spokesperson for North Korea said there was no hunger problem in the city, and suggested to the reporters that the protestors had perhaps taken a wrong turn into China. But to many in the press his answer did not settle the matter. When one reporter pressed him about the whereabouts of the Greenpeace people, Honorable Leader Kim, a known buff on American movies, stepped to the front of the podium and said somewhat cryptically, “Don’t you mean the Soylent Greenpeace people?” After which, to demonstrate that there was no hunger problem in North Korea, he invited members of the media to a sumptuous banquet at his palace.

Iran – Yet More Mysterious Disappearances
In a eerie parallel to events in North Korea, an international gathering of student and professional protesters that was scheduled to take place this week in Iran’s capital city of Tehran did not come off. Though thousands of protesters seemed to be flooding the city during the weekend, not one showed up for the protest of Iran’s nuclear policy that was scheduled to take place in front of President Mahmoud Ahmadinejad’s palace Sunday morning.

When asked what he thought had happened to the throng of protestors, a smiling and unflappable President Ahmadinejad, shrugged his shoulders, waved his hands expressively in the air, and told reporters, “What students? What protesters? All’s right with the world, Allah be praised.”

When pushed on the subject by a skeptical FOX news reporter, Ahmadinejad added. “But if anything unfortunate did happen to them, like, say . . . just hypothetically, mind you . . . if it turns out that they were poisoned by Saran nerve gas and their bodies placed in a mass grave somewhere on the outskirts of Tehran, then I suspect the Jews are behind it.”

The United States – Group Protests Unfair Treatment By Capital Police
Meanwhile, this weekend in the United States – where public outrage is a considered a virtue and protesting a cheap weekend’s entertainment – members of the American Masochist Society gathered en masse again in front of the White House to protest the lenient way the Capital Police treated them in last week’s protest.  AMS spokesperson, Kelly O’Rouke, explained to our Paxety correspondent in Washington, “We will not stand for this deprivation of our constitutional right to the pursuit of happiness! Now, will you spank me, please? Harder! Harder, you imperialist dog . . .