by Mahone Dunbar on September 14, 2007
in Politics 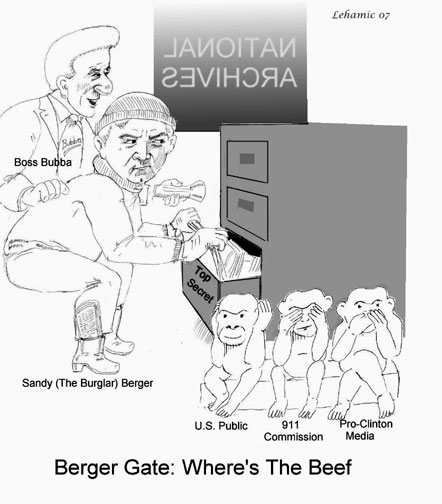 Just another rant about Bill and Hillary, really.

Samuel (Sandy) Berger was National Security Advisor during Bill Clinton’s administration. Now, according to Newsweek, Mr. Burger is a foreign policy advisor to the Hillary Clinton campaign. Why is this significant?

In the wake of the 9-11 terrorist attack, as the 9-11 commission, the press, and the public were fishing for someone to blame for bin Laden, Mr. Berger visited the National Archives to ‘review’ documents from the Clinton Administration.

Shortly thereafter, employees of the National Archives saw Berger stuffing documents into his socks. At first they were reluctant to confront and accuse a member of former president Clinton’s administration of criminal activity; therefore, they watched Burger closely and even made copies of documents he requested so that if originals were destroyed or stolen a record of them would still exist. Mr. Berger was eventually caught stealing and destroying documents, was charged, and he pleaded guilty. Now that Berger’s slap-on-the-wrist sentence has run its course – this moral exemplar is once again on the political scene with a Clinton as a reward for – like a loyal Mafia soldier — taking the rap and keeping his mouth shut. In one year, he will have his security clearance restored. By pleading guilty to the charges, Berger avoided any questioning on the matter (like why was he stealing and destroying Clinton Administration documents, and at who’s request?) and further scandal to the Clinton’s spotless reputation.

The documents in question (the ones known about, not the ones that disappeared completely) related to the Clinton Administrations stance on terrorism, with specific recommendations about dealing severely with Osama Bin Laden. Next to the recommendations were Clinton’s hand written notes saying “No. No. No.”

The politically selective national media, which hounded Scooter Libby as if he were Frankenstein’s monster, seems not the least interested in pursuing this criminal violation of our national records. And why should they be? The Clintons and their gang are just a bunch of basically harmless well-meaning yokels, right?

The leniency with which Sandy (the burglar) Burger was treated is mind blowing. The media is more than partially to blame for the public’s lack of awareness of the depth of Berger’s crime and it’s implications about what Billy Boy Clinton was covering up. If the media doesn’t bang the drum, shout, and night after night use the news to point accusatory fingers at a criminal politician, it’s a non-event to Joe & Susie Public. Of course, if someone in the Bush administration had committed these same criminal acts – accessing the National Archives, then stealing and destroying national documents in an effort to protect the reputation of a president who was lax on national security – the major networks would be ringing the bells for impeachment and pompous senators would be holding hearings, perhaps parading for the cameras and showing mock indignation until Saint Peter blows his horn. Can anyone doubt this?

Once the Clinton’s and their Machiavellian mob are in power again (and assuming the continued apathy and ignorance of Americans, it now looks inevitable) I fear that some folks will think only something on the order of an MNOI (Much Needed Oswaldian Intervention) can stop them from permanently rendering this county and its economic and political system null and void. And here is the irony that lies bitter in the mouths of real Americans: while liberals eschew the south and look down their fine Bostonian noses at it, they elect and support the Clintons – a southern huckster, skirt-chasing politician and his shrewish, ice-blooded corrupt lawyer wife! The Clintons struck a bonanza by dressing up the pox-ridden tattered whore of southern populism in a white dress and selling her as a virgin to yankees who were horny to believe. Oh, Huey Long, how you must be laughing in hell.

The Clintons, Pelosi, Berger, and so on, represent the rot in the American soul, and as a group epitomize how my generation went brutally wrong; they are the embodiment of the axiom that ‘the road to hell is paved with good intentions. Under the guise of peace, love and freedom, they mouthed platitudes about freedom, helping minorities, saving the children, the homeless, etc. etc. etc., and ascended the political ladder. The other vital ingredient of their power grab was the creation of a whipping boy: the rich. (Most Democrats I’ve spoken with at depth still visualize a Republican as a fat, cigar-smoking banker, wealthy capitalist, i.e., an archetype that was in operation in the first part of the last century and bears no similarity to today’s working-class Republicans, many of whom are Republicans by default simply because they can’t stomach the emotional illogical rants and failed socialist policies of the Democrats). This is another grim irony that the general public is unaware of: the leftists in America, in the Senate and the House, Hollywood, and elsewhere, are by far richer than conservatives. The leftist power structure in America is the embodiment of what it purports to hate.

These political monsters use tyranny and deceit in their quest for personal power. Bill Clinton, who typifies the group, has no moral core, and is at best no more than a affable sociopath who uses his political power to expedite his sexual lust. Hillary is . . . evil in a shirt.

I wish to God that George Bush and the Republican party would get tough just for once and bring the jack boots down on these leftist crooks by using their own propaganda techniques, media saturation (the “big lie” technique pioneered by the Nazis), and so forth, to hoist them with their own petard. But, alas, George W. is pretty much a vagina, so I fear I wait in vain.

For America, as most of know and love it, the sands are running out. The vile reptile, Hillary, has uncoiled, and is winding her way slowly toward Washington – seeking once again to make the White House her lair.