Unintended Consequences: Voting for shock value may shock you 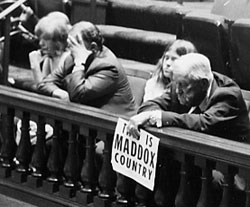 There’s a lot of talk about the recent French elections. One candidate, Jean Le Pen – a right-winger, anti-crime, anti-immigration – won 17% of the vote and will face current prime minister Jaques Chirac in a runoff. There’s lots of speculation that Le Pen’s voters don’t really support his policies but want to send a message to traditional politicians. Another theory says they want Chirac to face an easier opponent. Voters in Georgia once similarly voted in a governor’s race – with shocking results.

It was 1966. The Republican Party was enjoying it’s first success since reconstruction – Barry Goldwater carried the state in the 1964 presidential race. Bo Callaway was highly regarded in the Republican party both statewide and nationally and was the party’s only candidate for governor. He was even endorsed by former governor Marvin Griffin, a Democrat. (Callaway later served nationally in the Nixon administration.)

Maddox rose to national fame in the early 60s when he refused to integrate his restaurant “The Pickrick.” As a symbol of defiance, he handed out pick handles in front of the national TV cameras. Anti-Maddox wags assert Lester used the “axe handles” to assault blacks – there’s no evidence that ever happened.

Maddox was considered a joke by the smart Atlanta political community. But he finished second in the Democratic primary and took on Ellis Arnall in the runoff. Many Democrats voted for Maddox as a way of protesting the national position taken by the Democratic Party towards race and state’s rights.

Republicans added to Maddox’s vote total. Georgia does not register voters by political party. In 1966, a voter simply showed up at the polls, declared himself or herself a Democrat or Republican and voted. Since there was no opposition to Callaway in the Republican primary, many Republicans crossed over and voted for Maddox in the runoff thinking he would be an easier man for Callaway to beat.

As a result of the protest voters and the crossover Republicans, Maddox won the Democrat runoff – people across the state were shocked. Dr. Martin Luther King announced he was ashamed to be a Georgian.

In November 1966, Georgians went to the polls to cast their ballots in one of the most contentious governor’s races in history. Callaway got the most votes – Maddox finished second. Arnall got enough write-in votes to cause a huge problem. No candidate got 50% of the votes, so under Georgian law, the governor’s race was to be decided by the state legislature.

All eyes turned to Atlanta in early 1967 when the General Assembly convened. At that time, a Republican in the legislature was as rare as an ice cube on the sun. When the votes were counted, legislators voted along party lines and the unthinkable had happened.

Lester Maddox became governor of Georgia. Could the same happen in France?

As an aside, I have to add that a great deal of good came from Maddox’s strange election. The General Assembly had traditionally been a tool of the governor. With their election of Maddox, legislators felt free of his control. Also, many people in districts favoring Callaway threw out the Democratic legislators who voted for Maddox and elected fresh Democrats – and in a few cases, Republicans. Maddox himself proved a surprise. He personally broke up a vile and deadly county prison system and replaced it with a much better state system. He ended chain gangs. He appointed the first ever black state agency department head. He hired more blacks to state jobs than any governor before him, including the first black GBI agent and the first black state troopers. He expanded food stamps from 13 counties to all 159. All the while he rode his bicycle backwards and sold T-shirts and watches in a souvenir shop in Underground Atlanta.

Maddox was a strange character in a state that famously produces strange political characters.

Here’s a link to a nice 1999 interview with Maddox from Atlanta’s Creative Loafing.