by Mahone Dunbar on March 14, 2008
in Mahone Speaks, Politics 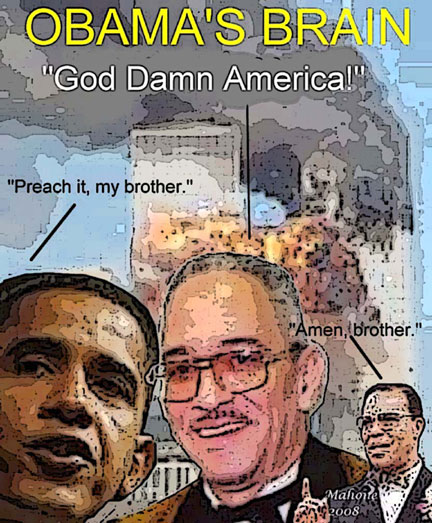 When the Reverend Jeremiah A. Wright, Jr. takes the podium and opens his mouth on Sundays, the congregation must watch astounded as the hordes of bats that inhabit the vast cavern where his brain should be take wing and flitter about the sanctuary. And like bats, his thoughts are rabid things that take flight on wings of rhetoric and inscribe untraceable paths of pseudo-logic.

Jesus was a poor black man! Oppressed by rich white men. Rich white men play an important part in Rev. Wright’s world. In fact, if you go through the bible and every time you encounter the word Satan just substitute Rich White Men for it, you have pretty much summed up his theological view.

And why is Rev. Wright’s POV important at all? Because he’s more than just an another insanely white-hating preacher who spews hate while calling it love, and who rails angrily at another race while maintaining what a forgiving soul he is toward his ‘enemies’. For nearly twenty years one Barack Obama has sat in a front pew of Rev. Wright’s Cathedral Of Hate. If Karl Rove was George Bush’s brain, then Rev. Wright is Obama’s. Wright is Barack’s spiritual mentor; and Obama has his hands firmly around Uncle Sam’s throat. Hence, what Rev. Wright screams out from the pulpit should be of more than passing interest to us.

(Oddly, as with Barack Obama and Louis Farrakhan, the Rev. Wright is only a shade darker than Snow White. Why is it then, that the intensity of the venom spewed by black leaders seems to always be inversely proportional to the ability to absorb light? Would it be unkind to parallel this to Evil house slaves working the field slaves into a state of rebellion against master?)

Of course the bible doesn’t say, nor infer, that one Jesus Christ was a ‘black man.’ But theology-on-acid is not the point here. (The singular fact that a Jewish girl, from the insular Jewish culture, could give birth to a half-Nubian or half-Ethiopian baby and that this could escape the note of various chroniclers of Jesus’s life, is beyond ludicrous, and is the theological equivalent of ‘waiting for the mothership’.) Though the mental gyrations, semantic fallacies, and skewed syllogisms one has to go through to reach this nadir of idiocy take an effort worthy of an antipode Hercules, that is not Rev. Wright’s most egregious rant. If there is a central theme in Rev. Wright’s rambling expositions and patch-work homilies, it is this: Whatever it is, Whitey Did It! And by America, he means “rich white people.” America brought down the twin towers because of it’s oppression of other peoples. Black people should not say “God bless America,” but instead “God Damn America!” Rev. Wright has also stated that The United States started the AIDs virus, and is behind the drug trade (in order to kill or incarcerate black men – who are such feeble-willed creatures that they presumably have no resistance to the lure of either drugs or un-protected sex.) The man also admires noted anti-white, anti-Semite Louis Farrakhan, and, in addition to traveling abroad with him, presented him with a lifetime achievement award on behalf of his church. We can only presume, by his attendance and loyalty to Rev. Wright, that Barack Obama gives tacit agreement to Wright’s anti-white sentiments.

If you’re Opie-white, like me, and prone to much musing about the oddities of racial equality in this country, you may find yourself wondering how many of the friendly black faces you meet on the street secretly hold views like Wright’s and Obama’s. And wonder if, like the good and reasonable Germans in pre-WWII, subtle hate and resentment has seeped into their psyches to the point that they can eventually subscribe to any solution to a problem that concerns (white) devils who are outside the protection of, and in opposition to, their black God. The fact is, when I encounter a new black person, it isn’t racism from me that is my concern, but racism from them.

Make no mistake, the Reverend Jeremy Wright, Jr. is the Grand Klagon, the Fuhrer, the Pharaoh, the King, Da Bomb, the Mac Daddy of white hate. And Obama has supped at his table for two decades. So what kind of “change” does Obama want? So, go and listen to what Rev. Wright is espousing . . . week after week, after week . . . as he indoctrinates black America children and adults in his ideology of ‘whitey hate.’ At the least, it will let you know why you should cherish and employ your Second Amendment Rights.

And how has Obama fared in Rev. Wright’s land of the Rich White Man? Pretty dam well. The lash is no longer employed, nor Jim Crow, and even the great white thumb of oppression seems to have exerted little influence on his life. Other than the fact that his black biological father abandoned him (which seems to be pro forma these days), he and his wife, Michelle, have amassed power, wealth, and position. They attended prestigious institutions of higher learning, generated money, purchased prime real estate, and have floated to the top of the political cess pool. Except for Barack’s light tan, they are almost identical to Rich White People.

In the wake of this recent controversy — the mere fact that some of his comments have come to light in the press and on the web — The Rev. Wright has resigned as minister of his church. Like a roach, he has attempted to scurry away from the light. But the fact is that Barack soaked up this anti-white, anti-America bullshit for nearly twenty years, and only under the heat of media exposure did he try to withdraw to a safe distance from it. So, Barack’s “Change” may be coming soon to a constitution near you. And it may just want the kind of ”change” the good Germans wanted in regard to the Jews.

Update – Newsmax reports that Obama was in the pews while Rev. Wright delivered his infamous sermon.

Next post: Sixth annual Eat An Animal for PETA Day