How To Cook A Cat

(A Pictorial Journal For Chefs ) 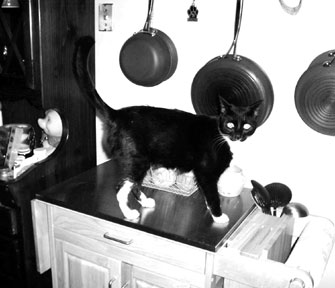 Recently, being bored, and hungry, I decided to solve three problems I was facing in one fell swoop; (1), the rapidly rising price of good protein; (2), my taste buds’ boredom with chicken, beef and pork; and (3) what to do about the surplus feline population around my house. My decision, albeit somewhat hastily decided, was clinched after finding that one of my wife’s numerous felines had had yet another “urinary incident,” (on my new leather briefcase). I would cook a cat. The ease of my decision was enhanced by the fact that my wife had just left town for an extended business trip.

Greatly excited that I was about to embark on a voyage of culinary exploration, I wanted to act before my fervor for feline flank steaks subsided. Being relatively new to the field of cooking domestic stock, I decided to consult an expert; my Vietnamese neighbor, Ting Ting, who lives two doors down with her mother, whose name has too many random consonants for me to pronounce. (Most neighborhood cats, as well as smaller dogs, reacting to some primeval instinct, won’t set a paw in their yard.) Since the Vietnamese culture has a known proclivity for the indiscriminate eating of anything with four legs, I figured Ting Ting could provide some useful tips on the preparation and serving of felix domesticus cuisine. Unfortunately, after forty-five minutes of using pidgin English combined with hand signs, I realized the futility of my quest; the language barrier was too high a hurdle for us to leap. Perhaps, in an attempt to simplify communication, my use of the words “eat pussycat” wasn’t an apt choice? Ting Ting became greatly excited after this, and would let me leave only after I agreed to a massage for twenty dollars.

Afterwards, still undeterred from my original quest, and feeling much more relaxed, I decided to consult that twenty-first century savant, the net. Lo and behold, there were pages and pages of recipes for cats. I started downloading a few that looked tasty, including . . .

. . . then there it was: Mississippi Style Catbeque. I could eventually try all the recipes, but for a starter this would be the easiest. Ingredients: one 12 to 18 lb. cat, several ears of corn wrapped in tinfoil; butter; salt and pepper to taste. Prepare cat as you would chicken halves, brush on butter; cook rib side down with grill high over coals for forty minutes; apply barbeque sauce to skin side, flip, lower grill over coals and sear for ten minutes.

Yum! I could hardly wait. Now to select the cat.

After careful deliberation, I decided on Hippy, a long-haired and somewhat dull-witted gray and white who mounted the scales at a hefty fourteen-and-a-half pounds, and whose body fat portended a delicious barbeque; however, either because of his extreme nervous condition, or psychic ability (or did the cleaver in my hand tip him off?), he fled as I entered the room and wedged himself under the stairwell beyond my reach.

I was disappointed, to say the least, and still hungry. There were plenty of other cats still around, though none of them seemed suitable for barbecuing. What next? In a hurry, I decided on the “short hair pan steak.” 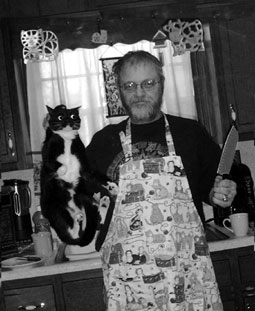 Short Hair Flank Steak: If you have a grudge against a particular cat, the preparation portion of the meal may prove especially satisfying

As the object of this recipe I decided on Scooter, a black and white trouble maker with a KP (known pisser) marked on his file. As well, I suspected him as the culprit in several mysterious ‘fecal incidents.’ But in spite of his bad attitude, Scooter was a long-legged beauty with healthy muscular flanks. He was a natural for pan steaks. First things first. The instructions said, I had to dress him. Though, according to folklore, there are purportedly a variety ways to separate a feline from it’s fur, I was no Daniel Boone; therefore I decided to take the modern path and got out my electric razor.

Note for the future! Cats react violently to the sudden presence of loud electronic implements! Another note. Be sure to keep plenty of antiseptic on hand.

After treating my wounds, I begin looking for Scooter, only to find that he had retreated to the top of the backyard fence, where he was perched – easily recognizable by the decorous shaved strip down the middle of his back – glaring in my direction and randomly hissing. He refuses my entreaties and growls menacingly whenever I approach. I fear I will get no more cooperation from him.

No sense dwelling on it. Besides, it’s not like I can’t lay my hands on another cat. Something simpler? Ah, the Maine Boiled Pussy Cat. I read the recipe. This was perfect. Not only was the recipe commensurate with my cooking skills, but there was no pre-cooking prep and you could peel them after cooking! Who would have the honor? I decided to let fate do the selecting this time. I opened the kitchen cabinet, withdrew a box of dry cat food and rattled it gently. Junior! He was the eldest cat and, despite a constant wheezing and a runny eye, seemed generally healthy. Other important factors in his favor were that boiling tends to tenderize tougher, older meat, and, as a senior cat, Junior isn’t half as fast as he used to be. For the Maine Boiled Pussy Cat, you basically put the cat in a large pot, add water, season to taste, bring to a boil, then serve with a wild rice pilaf and white wine. 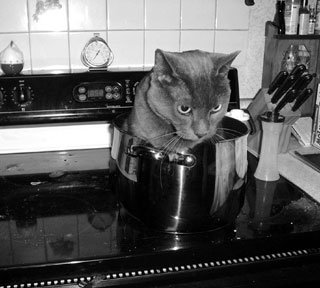 Another disaster. Junior did not cooperate! Kitchen now a mess. Where does she keep the mop? What had I done wrong? I went back and reread the recipe. There it was, not in the recipe itself, but in small print at the bottom of the page. “Warning: Be sure to sedate feline first using a small ball ping hammer.” Damn! In my haste I had failed to read the whole article.

It was nearly dinner hour and my stomach was growling almost as loudly as Scooter. What to do? After hasty deliberation, I finally settled on the Tabby tartar. Preparation proved to be both simpler and quicker than I had hoped (I remembered the ball ping hammer this time). It proved to be a delicious treat that appealed to both the eye and the taste buds. (See picture below)

Final note: Must think of a credible explanation for missing kitten before wife returns! 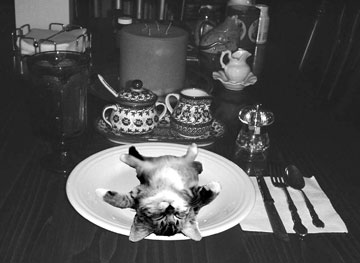 Tabby Tartar: I would recommend Kittens (these are readily available at your local animal shelters for no cost!) for the Tabby Tartar:
Not only is the meat tender, but kittens prove to be very trusting

Author’s Notice: no actual cats were harmed during the writing of this article. The only cats used in the dastardly  manner depicted above were literary cats. The cats pictured (with the exception of the not-actually dead kitty in the Tabby Tartar) are my own pampered and obnoxious felines and they participated, uh, willingly. Hippie, (Catbeque) in keeping with his paranoid nature, declined to have his picture posted on the Internet. As a manner of fact, he is upset that I used his name and description and is hiding under the stairwell as I write this.

Thanks to Meryl Yourish for the idea.