by Juan Paxety on November 9, 2009
in Middle East, Politics

Seven years ago, two self-described Muslims terrorized the Washington, DC area.  They came to be called the Beltway Snipers.  John Muhammed is scheduled to be executed tomorrow.

As more and more information comes out on Major Nidal Malik Hasan, including that he had tried to contact al Qaeda, it’s interesting to remember that Muhamed has a terrorist connection missed by the major media.  Here’s my post from October 24, 2006.

Last week, CNN caused a lot of outrage by airing a story consisting of video of an assassin shooting a U.S. soldier.  If you haven’t seen the story, it’s on YouTube.

The reporter’s voice over begins:

“A sniper is watching the American soldiers. You’re watching the unobstructed view from the sniper team’s vehicle …”

Last night, Hugh Hewitt aired the audio from Wolf Blitzer’s CNN show in which U.S. Congressman Duncan Hunter and a retired general discussed the propriety of airing the video.  Unfortunately, I have not yet been able to find a copy of the transcript, or a clip from the show, and Hugh seems to be interested only in posting clips relating to getting Republican candidates elected. TVNewser.com has a brief portion of Hunter’s comments, and quotes Blitzer as identifying the general as General Grange – perhaps General David Grange, who appeared as a military advisor on Lou Dobbs CNN show on Friday night.

The general said during the CNN show that he had been called on to look at the video to see what could be learned about the terrorist tactics.  He, like the original reporter, commented on the video, and the sniper round, being fired from a vehicle.  The general said that the shooting was from a hole in the trunk of a vehicle.

We’ve heard of that tactic before – right here in the United States. In 2002, snipers terrorized the Washington, DC area.  After days of shootings and a number of deaths, two men, John Muhammad and John Lee Malvo were arrested – exactly four years ago. They were tried and convicted of murder. They became known as the DC snipers.  It’s been little reported in the American media, but both men claimed to be Muslims on a jihad. Michelle Malkin has covered the professions of faith by the two murderers, and includes the following drawings by Malvo as proof. 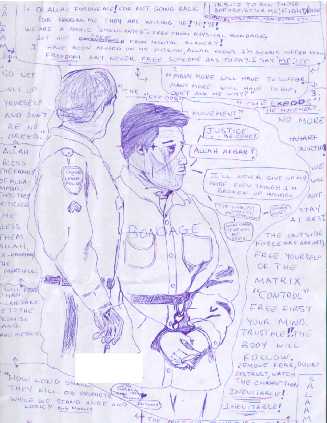 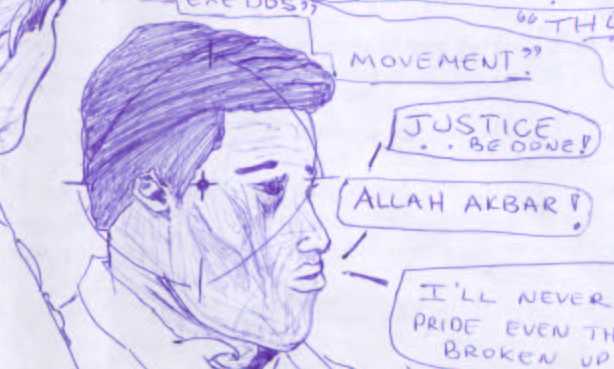 Large numbers of people in this country seem to be invested in the idea that the United States has not been attacked by Muslim terrorists since September 11, 2001.  Conservative Republicans want to believe that the Bush administration is protecting us – liberal Democrats don’t want to believe we are in danger at all.  The DC Snipers show that we have been attacked, and that we can be in grave danger.

Now, American soldiers are being shot in the same manner as American civilians were being shot down four years ago.  Is shooting from a hole in the trunk of a vehicle a common terrorist tactic? Or have Middle Eastern terrorists learned from American ones?

Previous post: Obama and the end of racism? … NOT