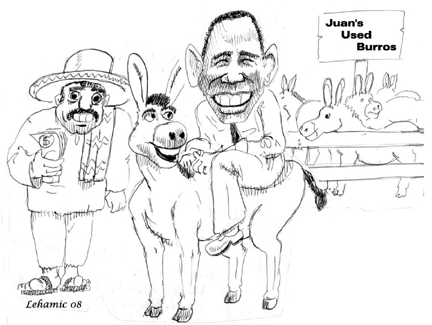 Stung by accusations that his ideas for “green energy” sources are merely useless generalizations and empty rhetoric, Senator Barack Obama (D-Il) today announced his endorsement of a bio-friendly method of conveyance (which already has a proven track record in Mexico) that not only uses organic fuel sources which it changes into harmless gases and handy inflatable slide lumps of fertilizer, but, when it’s usefulness is past and it is disposed of, is itself biodegradable.  Democrats and other progressive thinkers around the country immediately hailed Obama’s plan as a great leap forward for America.