by Administrator on September 7, 2007
in Humor, Politics 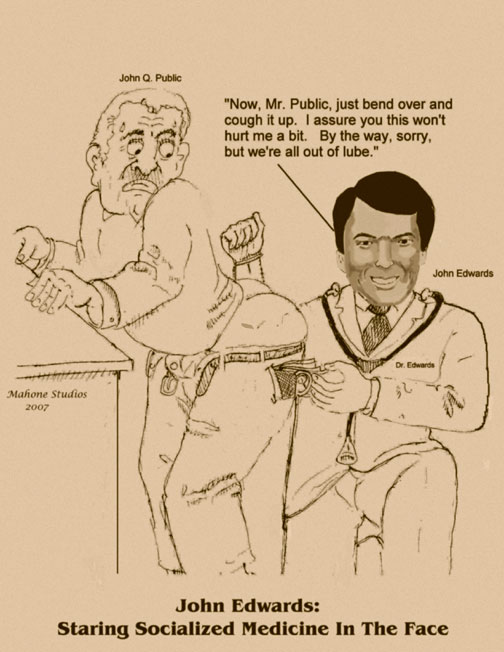 What could be worse than socialized medicine: ask John Edwards.

John Edwards thinks he’s slicker than Penguin shit! This week, the sue-your-ass-off trial lawyer, former senator, and current presidential hopeful managed the near impossible: he made Hillary Care seem docile. This was not easy to do, considering that under Hillary Care if a private citizen, (i.e., someone not privileged and rich like senators and congressmen) hires a private doctor he or she would be committing a federal crime.

The British have socialized medicine, and a bit of a problem or two with it. For one thing, they can not provide the incentive for prospective medical personal to enter the field, therefore, they import a lot of doctors and medical technicians from the third world, with a predictable drop in the quality of care. Canada is much luckier. There, if you are on a waiting list for a life-saving procedure and the length of time till your appointment exceeds your predicted survival time (and assuming you have adequate financial resources) you can simply pop down to the United States and purchase the medical care you need.

The Brits are currently considering NHS Health Miles Cards to reward clean living, and if you fail to abide by the clean living standards, you can be denied public-funded medical care. Point would be awarded on the Health Miles Cards by such things as losing weight, giving up smoking, receiving immunisations or attending regular health screenings. It would work like a supermarket savings card, with one earning transferrable points that can apply to other public services, like being given priority for other benefits or jumping the queue for public housing. Oh, boy. I can’t wait till this comes to America. Well, if by some stastical fluke of the space/time spectrum former Senator John Edwards gets into the Oval Office, we may well wake up to just such a nightmare.

Leave it to John Edwards to make the British system of socialized medicine look good. “Edwards Care” would not only require that everyone be covered, but would also require everyone to get preventive care! He recently told a crowd at a political stump that, “If you are going to be in the system, you can’t choose not to go to the doctor for 20 years. You have to go in and be checked and make sure that you are OK.” As an example, he said women would be required to have regular mammograms. (Fantasy sequence: “Ma’am, I’m here from the government, and I have a legal order allowing me to check your breasts. Please expose them . . . Now!. And you, sir. Stand back; bend over, and drop ‘em. Don’t think you can skip your annual proctology exam and get away with it.”)

Question: I’m wondering if this mandate would require regular mental health checkups for megalomaniacal politicians? That might make it worthwhile.

Thus, Edwards not only wants us to have universal health care from the cradle to the grave, but mandatory checkups; and this enforced by a government that has fallen apart at the seams on enforcement of border control, a government that would bring every man woman and child in America the same outstanding medical care our veterans receive via the Veteran’s Administration, all delivered with the same efficiency and economy as that provided by the United States Post Office.

Edwards is emphatic that every single American be covered (he may mean Meso and South Americans and Canadians as well, I’m not sure) and disparages all the other socialized medicine plans of other candidates. “Because,” he says, “if it (other plans) doesn’t they should be made to explain what child, what woman, what man in America is not worthy of health care.” (Well, I can think of a few Mr. Edwards – starting with sleazy politicians and slimy lawyers – call my office for a complete list) “Because in my view, everybody is worth health care.”

Edwards says his plan would cost a modest $120 billion a year (enough for about a million of his haircuts), paid for, of course, by ending President Bush’s tax cuts to people who make more than $200,000 per year. (Knowing the sneaky democrat manner of doing things, we might ask, does this include imputed income? Does it include income only, or static wealth?)

Here’s a put-your-money-where-your mouth-is morality question: why didn’t former senator Edwards send his wife to a ‘public’ health clinic, or a metro charity hospital, so she could receive the same care available to the poor in urban centers? The answer is as obvious as the 28,000 square foot mansion he’s building: equality is for the little people.

Here is a handy synopsis of Edwardsian hypocrisy, so you may consider the moral fiber of the man who wants to destroy the greatest medical system in history and turn America into the largest and most expensive nanny-state in the world. Do you want this blithering idiot deciding your future?

A man of personal modesty: John’s hair dresser during the 2004 election cycle, a Mr. Torrenueva, said that though the average price was $400 per haircut, plus travel expenses, one haircut cost John $1,250! How many insurance premiums for the little people would that have covered? All I can say is, Thank God baby seal oil hasn’t been found to be good for hair! At least he’s not a greedy oil baron like George W. Bush.

According to the local tax assessor, the value of John’s new home, which contains slightly over 28,000 square feet and sits on a 102 acre estate, will exceed $6 million when the facility is completed. It will be the most valuable home in Orange County, North Carolina, and perhaps the largest, if you include the recreational building attached to the main living quarters. The recreation building will contain, in addition to a basketball court, a squash court, two stages, and a swimming pool, a bedroom, a kitchen, multiple bathrooms, a four-story tower, and a room designated humbly as “John’s Lounge.” But if you’re thinking of dropping in for a visit to “the people’s candidate, don’t bother. The estate has “no trespassing” signs warming intruders away. Oh, the humanity: “Signs, signs, everywhere a sign . . . . messing my mind.” Guess John’s hippie peace and love streak doesn’t run too deep.

Edwards The Greener – Your Money Ain’t Where Yo Mouth Is

John Edwards recently made a big deal of criticizing Americans for driving gas-guzzling SUVs, which are more or less directly responsible for starvation in Africa, depletion of sperm whales and depriving Antarctica of icebergs. (If you have asthma, blame an SUV). Unfortunately, someone then noted that the former senator owned at least two SUVs himself! Blushing boyishly at being caught with his hand in the hypocrisy cookie jar once again, Edwards did a quick consultation with Al Gore and Leonardo DiCaprio, then acknowledged that he does own a Ford Escape hybrid SUV, (a bastard in the SUV world) and a Chrysler Pacifica, which he’s had for years (As if that makes it okay? Why hasn’t he sold it? Holy fleet of ecology-hating SUVs John Kerry!).

Declaring that he will never again purchase an evil SUV, Edwards said, “I think all of us have to move, have to make progress. I’m not holyier-than-thou about this. … I’m like a lot of Americans, I see how serious this issue is and I want to address it myself and I want to help lead the nation in the right direction.”

While on the campaign trail Edwards constantly attacked subprime lenders, especially those who instituted foreclosure suits against Katrina victims. However, according to data uncovered by the Wall Street Journal, 34 Katrina victims/ homeowners faced foreclosure at the hands of Fortress Investment Group, LLC – and guess which beautifully coffered Presidential candidate has a modest 16 million invested in Fortress funds? Here’s a clue: It ain’t Hillary, baby.

John Edwards can always be counted on to do the right thing – once he’s exposed by the press.

After being confronted by the seeming anomaly between his political platitudes and his financial portfolio, Edward promised to divest himself of involvement in Fortress Investment Group, LLC, and to personally assist those victims who faced foreclosure from Fortress. “I intend to help these people,” the former North Carolina senator said. Perhaps he can find a little room for them in his 28,000 square foot mansion?