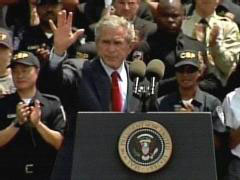 President George W. Bush showed up at what the news media insists on calling Glynnco, Georgia – it’s actually the old Naval Air Station Glynnco in Brunswick.  He took time to chastise folks for not supporting his immigration policy.  Here’s part of what he had to say:

Before I do, I do want to introduce some people. I want to introduce Secretary of Commerce Carlos Gutierrez — I appreciate you coming, Mr. Secretary. (Applause.) Carlos wasn’t born here, see. He was born in another country — Cuba. And now he sits in the Cabinet of the President of the United States. There’s something great about a country that welcomes people, people who uphold our laws and realize the great blessings of America.

With us, as well, is Senator Mel Martinez. He wasn’t born in America. He’s a Senator from Florida. He was born in Cuba. I don’t know if you know his story, but his mother and father put him on an airplane to come to the United States of America, to be raised by total strangers because they didn’t want their son to grow up under a tyrant named Fidel Castro. He used to sit in the Cabinet of the President of the United States; now he sits in the United States Senate. What a wonderful country it is, where people can come to live in a country based upon liberty, and realize the great blessings of our country.

And I want to mention those two men because, to me, they represent what the immigration debate is all about: Will we be a welcoming place, a place of law, that renews our spirit by giving people a chance to succeed?

So, Senator, thank you for coming, as well. (Applause.)

Secretary Gutierrez and Senator Martinez are not immigrants – they have nothing to do with the current immigration debate.  The current debate is over people from other countries who violate US law to come to this country and live – for whatever reason.  Secretory Gutierrez and Senator Martinez came to this country from Cuba wholly within the US law – a law called the Cuban Adjustment Act signed into law by President Johnson in the 1960s.  The law recognizes folks escaping from the communist hell hole of Cuba as refugees.  Refugees come under entirely different laws than do regular immigrants.  Refugees are recognized as people escaping tyranny – as people needing the protection of the United States.

Mexicans, Saudis, Haitians, Jordanians, Somalis and others coming to the US to work, to beat their Indonesian slaves at Disney World,  or to overthrow the government and impose Sharia don’t come under the laws that were passed to benefit people such as Secretary Gutierrez and Senator Martinez.  If Mr. Bush can’t understand this, it’s no wonder he fails to understand the complexities of immigration law.