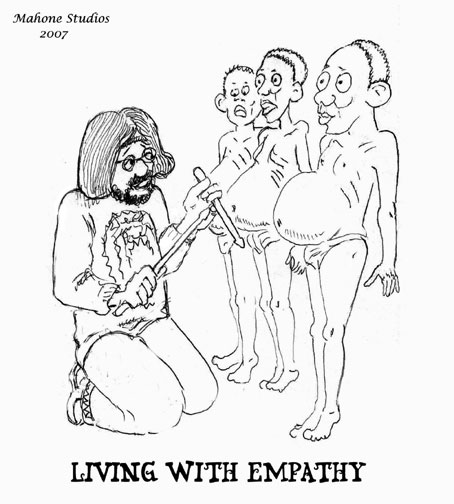 According to the unimpeachable Wikopedia, there are approximately six billion humanoids on this planet currently. Just what should this fact mean to the dedicated liberal? The empathic, caring being. It means this: at any given moment, instant by instant, a substantial number of the human population (including children) are suffering loss, deprivation, low self-esteem, pain, disease, hunger, tragedy, grief , terror, horror and every other nuance of negative emotion that can be named.

If you want to feel sorry for deprived and suffering humans, there is no end of opportunity, for truly lamentable and pitiful states are a constant factor in human existence, and, thanks to omnipresent media, today we can be right down there in the offal pit scrambling for protein nuggets with the most desperate of them.

Each of us has our favorite sufferers. Myself, I sometimes lay awake in the still of the night worrying that there are millions of children in Africa and Asia who have never known the joy of an Xbox, or have nary a Gameboy in their extended family. I can only wonder what the United States government is going to do to alleviate this racist inequity. Are you listening Senator Kennedy?

So what can a caring, yet rational, being do about all this mass suffering? If you are empathetic to an extreme degree, worrying about the plight of others’ suffering is a full time job. You hardly have time to enjoy your low-fat double latte every morning while driving your Toyota Hybrid Prius to your consciousness raising group which today is protesting George Bush’s birth. A population of six billion ensures that being a martyr to worrying is a full time endeavor: there is no time off for vacations in your Happy Place. If you do visit your Happy Place, then you are an extreme slacker, perhaps even a Republican.

The concept of how suffering relates to numbers in a population of six billion is something liberals have failed to grasp. The law of large numbers also generates other disquieting questions, for with six billion, incremental percentages suddenly loom large: what percentage of a population of six billion are homicidal maniacs? What percentage of these are in positions of political, religious, or cultural leadership? The same question goes for common murderers, child-molesters, perverts of toilet-licking caliber, practitioners of barnyard sex, hirsute cross-dressing truck drivers, United States senators, and other unsavory aspects of society. For example, if a mere half-percent (.05% ) of the world’s population are homicidal maniacs, that means (taking the more conservative figure of five billion for the world’s population) 250,000,000 dangerous lunatics – that’s about the population of the United States, give or take a few million pine-straw layers. This is a substantial number for the other side (conservatives) to worry about. Here’s an exercise for empathy freaks: if 7.85% of the world’s population goes to bed hungry every night, then (a) how many meals-on-wheels will you have to deliver every day; (b) how much gas will that use, and, (c) factoring in the International Date Line, how many of these meals will actually be breakfast before your rounds are through? Put your answers on the desk and then file out quietly.

Almost nobody likes to see starving babies. Starving Biafran children with bloated bellies seem to be typical of the type (in fact: I’ve seen so many pictures of these that I’ve casually and cruelly considered that those distended bellies may just be a genetic trait in Biafrans.) Here’s a moral/empathy exercise for you: how many pictures of starving Biafran babies to you have to be exposed to before you go through the progressive stages of sadness, outrage at cruel fate, overwhelming desire to feed these babies, feeling emotionally taxed, boredom, indifference, and just damned tired of it? Is there a limit to your caring? Is there a limit to how much you are willing to force others to do to support your astronomical sense of empathy?

The point is, if you get your kicks from feeling deep empathy for starving (or even just ‘hungry’) children, you will never be at loss for something to worry about. It’s just a matter of extending your radius wider and wider to embrace them. And if you grow bored with trying to feed all the hungry children and furnish each and every one with an Xbox, then you simply increase the scope of your empathy to include other things. The next step, naturally, is to worry not just about humans, but wildlife as well. And SNAG’s (Sensitive New Age Geeks) have already managed to get a toehold in the legal system for some creatures, like monkeys. And this makes a certain sense, for surely the anthropomorphic monkey is as worthy of as much legal protection as the average LA gang-banger. And since there are so many deep-empaths around these days, their sensitivity has branched out to embrace the earth itself, and, the ultimate thing to worry about, the weather. The Greeners believe that somehow if we all drop technology’s benefits, i.e., industry that clothes and shelters us, mechanized agrarian techniques that feed us, and medical technology which sustains us, and just go live in the jungles again, somehow we’ll all be better off. And least everyone would be suffering and starving to the same degree then. That’s called the least-common-denominator method: the only sure way to have organized equality is to reduce all humans to the same base level. Deprivation is the great equalizer. After all, you don’t want your kids having full bellies when other children are starving, do you? Why should little Susie be disease free while little Nihembah is covered with mysterious, fly-attracting, oozing third-world pustules? Hmmm?

Here’s a moral test – one rooted in real time, that I’ve asked many liberal mega-empathizers to take. It involves the very real issue of how to allocate resources for suffering: You have One million dollars at your disposal to help treat children with medical problems. You have a choice of (a) helping infants with heart valve problems, or (b) helping crack babies survive. You have to decide either (a) or (b) and cannot mix and match. For one million you can finance ten ($100,000) heart valve operations, resulting in ten kids going on to lead normal productive lives; or, for the same one million, you can extend the life of one blind and retarded crack baby for approximately a year. Is it the lady, or the tiger?

There is a type of personality that has grafted on to technological society, one that is consumed with expounding the negative to the exclusion of everything positive in the world. The media provides them with unending fodder which sustains their lamentable state, and at the same time provides them a breeding platform. From the hallowed halls of Hollywood to the habitual picket line outside the White House, these people are emotive bombs, which politicians and media aim in whatever direction they please. They operate on the principle of mob psychology, pure and simple. Get them worked up into a frenzy, as Pol Pot, Mao, Stalin, Hitler, the leaders of Islam or dozens of other tyrants could tell you, and you have a formidable weapon at your disposable.

For these people, who insist in wallowing in the misery of others, the modern world is an unending treat. When someone mouths a well-worn cliche that hits their G spot, their eyes roll up in ecstatic trance, they began chanting in mass, marching, then lobbing improvised missiles and engaging in mindless destruction. You cannot appease them; you can in no way satisfy them, and you cannot rationalize with them; they are the human version of the soldier ants. Get out of their way or be destroyed. Misery never ends.