by Mahone Dunbar on July 4, 2010
in Mahone Speaks, Politics

Earlier this month Senator Byrd was sent to that great cross-burning in the sky. Racists everywhere were saddened, yet some good did come out of it. For Byrd’s funeral proved to be another adventure in disassembling the truth for Arkansas whore-dog and impeached former president Bill Clinton, who tried to gloss over Byrd’s racist past by saying of Byrd, “He once had a fleeting association with the Ku Klux Klan, what does that mean? I’ll tell you what it means. He was a country boy from the hills and hollows from West Virginia. He was trying to get elected.”

“And maybe he did something he shouldn’t have done,” Clinton continued, “. . . and he spent the rest of his life making it up. And that’s what a good person does. There are no perfect people. There are certainly no perfect politicians.” Yes, by God, Clinton is correct there.

Still, it is astounding, the lies Bill Clinton will tell. Byrd was no hapless victim caught up in events he didn’t fully understand: he not only bouncy castle with slide for sale was the head of his chapter of the Klan, and chief recruiting agent, but also left many written exemplars of his detestation of the black race in America. In short, his writings proved he was not amused by black people.

(After the funeral, speaking informally to reporters, Clinton added, “Shucks, it’s not like he ever hanged nobody. The worse he did was tease them about their Brillo-like hair and note their propensity for stealing watermelons. Heck, he even praised them on occasion for their ability to shine shoes!”)

However, for the sake of debate, and amusement, let’s assume Clinton was telling the truth (for just this once), i.e., Byrd only joined the Klan to get votes, hence, he was only a titular member. If true, that would be even worse, since it meant Byrd was willing to turn his back on any presumed moral principles of political or spiritual equality he harbored just to get political power. A true racist would at least have some immutable principles, and would be morally above someone who sold out principles they did believe in – like political equality for the various races.

Look at it another way. Say, a German politician had claimed he only joined the Nazi party in order to gain political power. That certainly would let him off the hook for the Jewish death camps, right? Clinton did not succeed in removing the moral Albatross from Byrd’s neck. But then again, Bill Clinton has never succeeded at anything when it comes to establishing moral worth! It only proves a Democrat like Clinton will say anything – in spite of the overwhelming historical evidence to the contrary – because of his surety that the mass of citizens he’s speaking to have neither the intellect to ferret out the truth nor the moral desire to see it established.

Meanwhile, later that evening back at the White House, President Obama, at the suggestion of Michelle, reverts to that Old Time Religion in an attempt to raise his poll numbers from the dead. 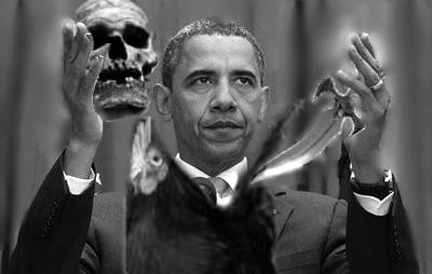