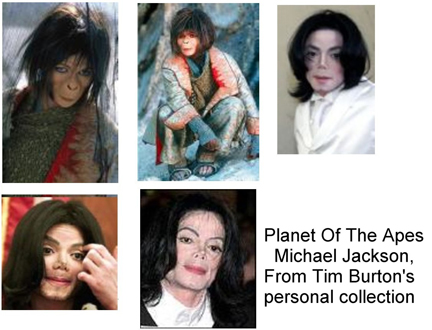 In an exclusive interview with Paxety Pages, director Tim Burton revealed to correspondent Mahone Dunbar the shocking news that Michael Jackson had a starring role, unheralded until now, in his epic remake of Planet of the Apes, featuring Mark Walberg. (Planet Of The Apes was Burton’s dark metaphor of the future of race relations in the United States:for example, among many visual clues he gives, Burton has little ape children gleefully shooting hoops on a residential street, an obvious reference to darker-hued urban youth invading suburbia).

“I was intrigued by Jacko’s work in “The Wiz,” Burton said last week over biscuits and tea. “He had a vital and unique animalistic quality that I thought could capture the nature of an ape woman. And of course there was his affinity to apes, what with having lived with his own monkey, Bubbles, for so long. The fact that he would require very little makeup to ease into the role – he already had the upturned button nose, the wide nostrils, the permanent eyeliner, the lipstick, the wigs . . . just a couple of cheek implants to puff out the snout a little was all that we needed to add, actually – was just a fortuitous bonus for me as it provided quite a savings on a makeup artist.”

When I asked him why Michael had not been credited for the role until now, he explained: “Just after the film wrapped up, Michael came to me, crying and distraught, and explained that his mother, who is a dedicated religious fundamentalist, had threatened to disown him if he was publically associated with the film. In her Biblical view, man has dominion over animals, and is separate from them, and to show otherwise is unforgivable heresy. Well, like Elvis, Michael revered his mum, so I called Helena Bonham Carter, explained the situation, and asked if she would mind taking credit for the role of Ari, the featured ape woman in the film. She agreed, of course. Now that Michael has passed, I thought it only fair that the world recognize his talent for what it was.”