by Juan Paxety on September 11, 2008
in Latin America, Politics 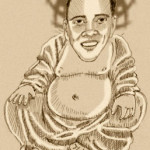 Barack Obama seems to have a problem with women. This issue was first raised by Hillary Clinton supporters, and I put it down initially to campaign bitterness. Then it got worse.

Now the Republicans have nominated a woman, Sarah Palin, to be vice president. And we see the strange spectical of Barack attacking her more than he is attacking John McCain.  It’s as though she has gotten into his head and he can’t handle it.

Why is this?  It seems more than just normal campaign politics.

Could it be Barack’s early education?  We know that he was educated in Indonesia from about the age of seven until 10 or so.  He was enrolled as a Muslim, and several sources say that he received Muslim instruction.  I do not believe that he is a Muslim now, but the past Muslim influences can’t be denied by reasonable people.

We know the Muslim attitude that women are subserviant to men.  Could his early Muslim education have instilled that attitude in Barack, and does he still express it today?