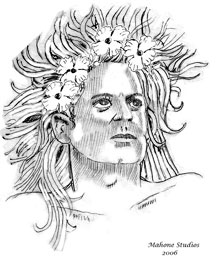 Yes, yes, it was back in the wild days of 1970 – the days when Barak Obama’s friend Bill Ayers was blowing up stuff as a member of the Weathermen – that Earth Day was born.

I remember it well. After a shot at college and a couple of years on the road with a band (which is where I met Mahone) I was back in school intending to become respectable. I was required to take a biology course, and the instructor made the course interesting – even to a musician. In the Spring of 1970, I needed a science elective and the same instructor was teaching an ecology course, so I signed up. That’s when I found out Dr. Mary Louise Cook was a commie.

There were real environmental problems in 1970 – cars spewed pollutants, factories poured smoke directly into the atmosphere, and a lot of plants simply dumped hot water directly into rivers and streams. But the problems weren’t nearly as bad as some predicted.

Dr. Paul Ehrlich studied butterflies at Stanford until he decided that millions of people were about to starve to death. He wrote The Population Bomb in 1968 and predicted that the world population would outstrip food sources in just a few years. He also said that there was nothing to be done – the dye was cast.

Dr. Cook fell for all of it. She taught us that democratic government would not be able to solve the problems. She said only a dictatorship could be strong enough to make the tough decisions necessary to save the earth.

Needless to say, not one of Ehrlich’s nor Cook’s predictions came true.

Today’s ecologists are not quite so forward. Rather than advocate a hard dictatorship, the modern purveyors of panic advocate the soft dictatorship of bureaucracy.

What happened to us in that 1970 ecology class? Luckily, we had lots of field trips and spent most of our time searching for wild marijuana. The allure of getting high in 1970 was far greater than worrying about food in distant year of 1975.

Update – It appears our old friend evo morales, castro wannabe of Ecuador, agrees with Dr. Cook. The BBC has video of his statements before the UN.

“If we want to save our planet earth, we have a duty to put an end to the capitalist system,” he said.

The man most likely responsible for supplying coca to el mico putumayo hugo chavez went on to attack Western nations for converting food to bio fuels. I sort of agree with him on that one.