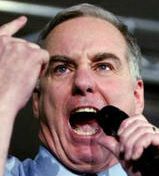 There was a lot of talk last week about John McCain’s blatant hypocrisy on ethics and integrity in Washington.

McCain is now breaking the law by ignoring the campaign spending restrictions for the Republican primary that came when he asked for federal matching funds — funds he used as collateral on a loan that helped keep his campaign going.

But now that the lobbyist and special interest money has started pouring into his campaign, he’s trying to back out of the promise he made just a few months ago. They’re feeding so much cash into his bank account, this “reformer” wants nothing to do with federal campaign finance laws anymore.

That’s why today, we’re filing a formal complaint with the Federal Election Commission demanding that John McCain be held to the campaign finance laws. Trying to back out shows a total lack of integrity and honesty — he made a deal with the American people to to abide by the law, and in return, he was guaranteed taxpayer money that he used to back a loan.

Juan, I’d like you to add your name in support of our complaint, and ask as many people as you can to sign on. American taxpayers made a deal with John McCain — now that he’s flush with lobbyist cash, he wants to pretend that it never happened.

Here’s the background on the situation.

By taking the federal funding, he agreed to spend no more than $57 million until the Republican convention. But so far, his campaign has spent at least $49 million — leaving him with less than $10 million to campaign with through September.

Now that he’s won the nomination and has the support of the Republican lobbyist and special interest machine, he’s trying to ignore that the whole thing ever happened. He recently wrote a letter to the FEC telling them that he was backing out, even though the FEC is very clear that any request to withdraw from the agreement must be approved; you can’t just change your mind and take it back — legally, you have to be given permission.

McCain isn’t asking because he knows he’ll never be granted permission, and he doesn’t want to have to accept the funding restrictions he agreed to when he used the money as collateral for a loan. He’s ripping a page right from George Bush’s playbook: ignoring the laws when they aren’t convenient and hoping no one will notice.

Stand up and show him that hundreds of thousands of people have noticed — he can’t change the rules in the middle of the game because he doesn’t like how things are going for him:

Using government programs when it’s politically convenient and breaking the rules when it’s not … remind you of anyone?

Just like George Bush, John McCain thinks he’s above the law. McCain poses as a reformer, but seems to think reforms apply to everyone but him.

Time to send him a message.