They belong to The Oswald Generation

James Lileks today does a masterful take down of that tired old dog Garrison Keillor.  Keillor writes in the manner of folks who have gotten old and write about how things were “back then.”  Here’s a bit of it with Keillor in blue and Lileks in red.

You children missed out on Richard Nixon: He was Halloween personified. An unctuous creepy figure who had not a shred of the genuine in him and yet, say what you will about him, Richard Nixon was never in favor of torture. He never strutted on a stage and said, “If I knew that America was in imminent danger of being attacked by a million rabid fruit bats and that one particular horrible evil person was in possession of secret info about that attack, I would not hesitate for one moment to drive red-hot needles under that person’s fingernails” – that sort of thing did not pass for political discourse back in Nixon’s day. But times have changed.

In Keillor’s world, a major terrorist attack is analogous to a plague of bats. Fine. At least it’s official: for the Gratingest Generation ( a term I will now drop, lest it, well, grate) the Current Occupant is worse than Nixon, which lends a terrible immediacy to their current lives, and also brings back the heady days when the entire world, from the Smothers Brothers to Doonesbury, was on their side.

There’s one big trouble with Lileks analysis. He calls Keillor a Boomer. 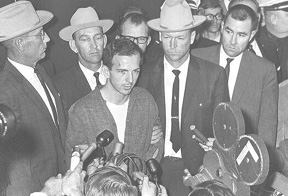 Lilek’s mistake has become very common – to call folks boomers who are not.  The generation that fell between the Greatest Generation and the Boomers is so undistinguished, it does not have a name. These are the folks who were children during the War – born too late to fight but before the war’s end.  It’s the generation of whiners and losers and most of the hippies, and, unfortunately, far too many of these folks are identified incorrectly. Well known members besides Keillor include Abbie Hoffman (1936), Janis Joplin (1943), Jimi Hendrix (1942), John McCain (1936), Trent Lott (1941), John Kerry (1943), and Lee Harvey Oswald (1939).  I’ve chosen to call the generation The Oswald Generation, after it’s most famous member.

Don’t confuse this bunch with boomers.