The 60th Anniversary Of The Roswell UFO Crash

by Mahone Dunbar on July 6, 2007
in Humor, Politics
Roswell

The Event That Changed The World . . . well, at least a little bit, maybe

Al Gore is an evil alien-human hybrid who intends to take over the planet and I have the proof! But wait . . . you all knew that already, so first, let’s talk about Roswell.

Roswell. That one word – which, like Jesus, Noah, Mohammed, and Cher, needs no modifier to evoke a vital image and a sea of ideas for people — connotes a flood of information to the UFO believer. Roswell, of course, refers to Roswell, New Mexico, and something that fell from its azure and otherwise boring skies there sixty years ago. Like the story of the nativity, and Noah’s flood, everyone is familiar with the essential elements of “Roswell.” And like the true believers of the gospels in the first post-Jesus century, the UFO community’s true believers also seek to combine, codify, and canonize the story’s mythological elements and diverging stories into a more or less palatable, if not totally comprehensible, version that can be fed to children one day in the form of cute little watercolor story boards in the New Age equivalent of Bible School class. Which brings us an interesting sociological reality of human nature: history turns into myth as time proceeds: myth spreads out and changes as time proceeds, with finer and finer detail and more eye-witness (second and third-person) testimony appearing to embellish the story, but very little verifiable evidence added. Matters are quickly obfuscated and once again it is left to believers and skeptics to sort things in accordance with their respective natures.

And whence does this human propensity to make myth from history arise? Some chose objective facts as their rule of standard, while others choose pure belief, unsupported by fact. For example, there are those in America who persist in believing that a two-bit whore-hopping slime-ball lawyer from Arkansas actually ‘feels their pain’ – even after said individual has banked millions of dollars from foreign sources not friendly to the United States, stolen White House furniture (which is apparently somewhat of a tradition among trailer-trash in Arkansas), and sold pardons to drug lords, tax-cheating acquaintances and other unworthies in a parting fart in America’s general direction. So, you see, belief is inexplicable.

According to the lore of UFO believers, Uncle Sam, always the villain and a patsy for the ills and confusion of the world, has squirreled away the wondrous, simply marvelous technological advances which the space brothers so kindly provided us – and now, naturally, the president gradually feeds it out to the R & D departments of his favorite evil mega-corporations. My, my my; what Dick Cheny must know! The mode of technological transfer was done by the aliens either A) crashing and leaving it for us to retro-engineer, or B) surviving and making a deal with the government to provide the advances in exchange for a few human bodies to experiment on/eat occasionally. Either way, you owe everything from your laser-eye surgery, your I-pod, and the little implanted chips that beep when you try to shoplift, to the alien brothers and the evil US government. Just be glad the evil shape-shifting reptilians from Sirius haven’t demanded your presence at dinner time (which prompts the paranoid thought: Hmmmm, just why are Americans getting so fat? Could the Twilight Zone episode “To Serve Man” have been right?). I think it’s diet time again.

My first thought was that the CIA was behind the Roswell hoax (or, as they might call it, Mass Population Perception Modification, or something like that), but Juan, party spoiler that he is with his damn facts, pointed out that the dread CIA didn’t come into existence until a few months after the Roswell Incident. There was a forerunner organization, though, called the CIC, which may have been just as capable of evil cover ups (after all, it was created by the United States government). 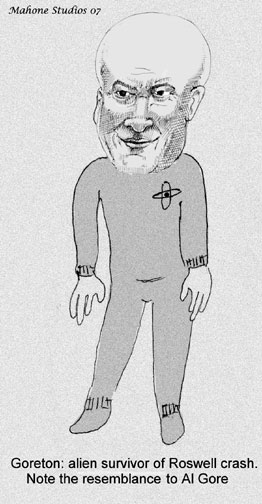 Since I’ve been interested in UFOs since I was a weird little boy reading science fiction into the deep hours of the night, I’ve followed all the twists and bends of the Roswell myth. My conclusion is that the government indeed covered something up – in a clumsy fashion – and that something had to do with military research. For those of you interested in UFOs, pro or con, Karl T. Pflock’s “Roswell, Inconvenient Facts and the Will to Believe,” gives a fascinating point by point meticulous refutation of the standard alien-crash-government-cover up scenario on Roswell. I would also recommend “Revelations,” by Jacque Vallee. Vallee lists nineteen different claims for UFO crashes (all covered up by various governments). On the web one can find a list of purported UFO crashes that numbers 36 or more. The number of alien bodies purportedly recovered and/or buried by locals, numbers over one-hundred and twenty! However, even if we take Vallee’s more modest list of nineteen major UFO crashes (according to classic UFO myths), then the earth is, for reasons unfathomable to mere human minds, the destination of every driving-impaired alien in the universe. Let’s hope they’re at least flying enviro-friendly spaceships — hopefully even biodegradable.

And now for the truly scary part. Please follow the facts closely here: Sixty years ago, an alien ship crashes in Roswell, New Mexico. Exactly nine months later (the period of human gestation) a strange child named Al Gore is born to the family of Senator Gore. Sound familiar? Safely planted in a family with power and money (we’re on 666/Damien territory here, the astute reader will recognize) he slowly assumes a messianic status among his followers and seeks the most powerful position on planet earth! I think there’s nothing more to be said here. Though you may find the accompanying picture of Goreton, the sole survivor of the Roswell crash, oddly familiar.  Is there any good news?  Yes.   Al is a product of the big-headed grays — who, due to their swelled heads and consequential infatuation with themselves,  think they know everything; but since they are prone to creating endless bureaucratic tangles, are fairly harmless; Hillary Clinton, on the other hand, is representative of the breed of shape-shifting evil Reptilian aliens, and the more fendish aspect of alien invasion.  This is particularly evident when she tries to mimic accents of indigenous peoples.  When she does this, look closely and you can see her pupils shrink to slits. If Hillary gets into office, you’ll be safer receiving a proctology exam from a team of pissed-off Islamic British doctors.

You have been warned.