by Juan Paxety on May 22, 2007
in Latin America, Law and Government, Politics

Did he read the bill? 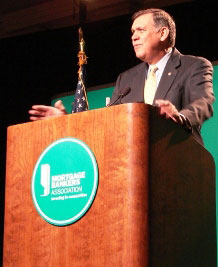 Florida’s junior senator Mel Martinez has announced his support for the immigration reform bill currently before the Congress.  Supporters have said that once we read the bill and understand it, we will favor it .  Hugh Hewitt has read the bill and finds a lot at fault.  Here’s my question sent by email to Senator Martinez:

You say that you are in favor of the Immigration reform bill currently being debated in Congress.

How much time have you spent reading, studying and analyzing the actual bill as introduced?

As always, we’ll let you know if an answer is received.

(No, I have not written Florida’s Democrat Senator Bill Nelson.  I think that’s hopeless.)